The Case of the Clashing Logos

TriMark became alarmed because of the striking similarity between the two companies' logos and PFG's name change reflecting a closer connection to TriMark's core services.

On behalf of TriMark, Freeborn filed suit in federal court in the District of Massachusetts, seeking a preliminary injunction to cease PFG’s use of its new logo. To prevail, TriMark needed to demonstrate to the court the likelihood that PFG’s new logo would result in consumer confusion.

Freeborn educated the court on the unique nature of the foodservice industry, providing facts about the types of customers who would be exposed to both logos, the products and services offered by the companies, and competitive overlap.

PFG contended that its new logo would not create confusion because its name would appear next to that logo. Freeborn explained how foodservice distributors, such as TriMark and PFG, often acquired local operating companies that used various trade names but shared a common trade identity (such as TriMark’s logo) to present a unified image to the national marketplace.

The court held that, “TriMark … has established that it competes for business from the same customers and potential customers as [PFG], namely independent and chain restaurants, hotels, country clubs, healthcare facilities and numerous other businesses.”

The court also found that the addition of PFG’s corporate name to the logos would not prevent likely confusion, “since both TriMark and [PFG] have grown by taking over other companies, use the [acquired] companies’ names along with their own, and use the (virtually identical) design as the unifying branding mark.” 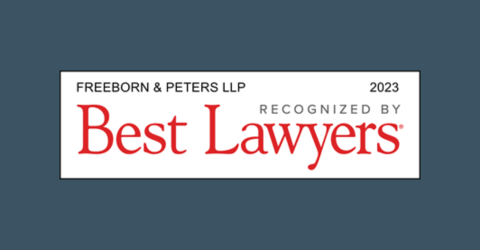